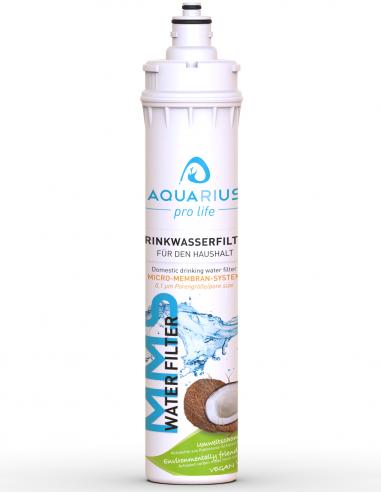 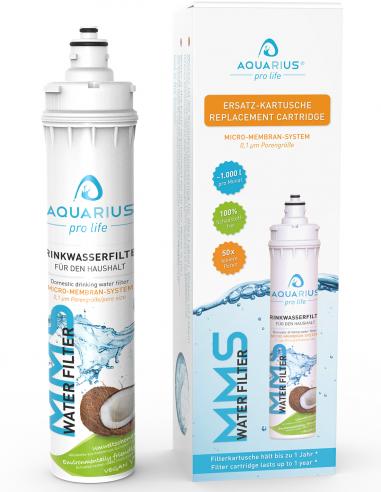 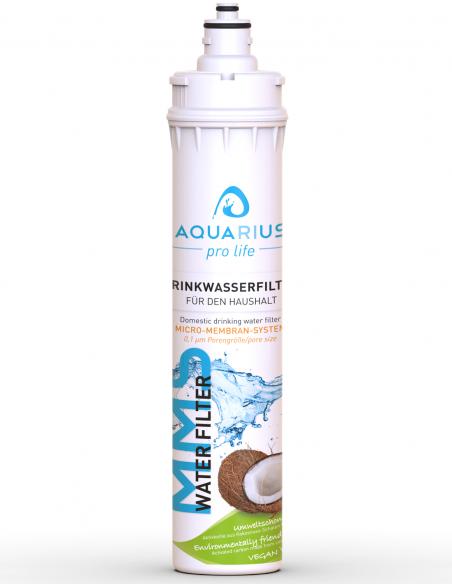 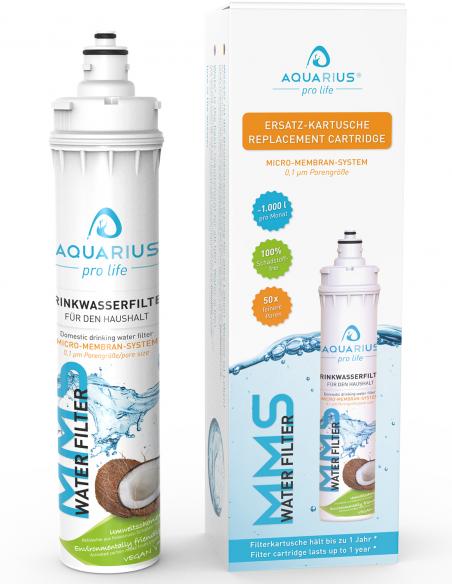 Our high-performance replacement cartridge for the MMS water filter

Attention: Here you order only one filter replacement cartridge - NOT a complete set!

Questions and answers about our water filter

First, the water passes through a food-safe mineral mix, which changes the structure of the water through ion exchange so that the subsequent filter stage can filter out e.g. heavy metals even better. In addition, a very effective pre-filtration takes place here.

The filter material of the second stage consists of activated carbon made from coconut shells. While many activated carbon filters use a loose fill, we use an extremely compacted pressing! This is the only way to achieve the enormously broadband filter effect, with a simultaneous high water flow of approx. 4.5 - 5 litres per minute. In addition, we increase the effective surface enormously.

This activated carbon block has 3 mechanisms of action:

1. sieving effect - the very fine pores (0.3 micron) filter out substances such as sand, rust, asbestos fibres, suspended particles as well as bacteria and single-cell parasites from the water!

2. adsorption effect - the so-called Van-der-Waals forces bind substances such as lead, copper, fungicides, pesticides and herbicides to the activated carbon by atomic forces!

3. catalyst effect - this means that the activated carbon promotes chemical transformation processes without being consumed itself. For example, dangerous chlorine compounds are removed from the water!

Our innovative Micro Membrane System (MMS) with a pore size of only 0.1 micron (=100 nanometres) forms the third and most thorough filter stage. Hardly any other filter in this price range filters in the nanometre range has such a fine pore size. Here, all suspended particles and the smallest bacteria, fungi and parasites are safely retained. The performance and quality of our drinking water filter system has been tested and confirmed by 2 independent German laboratories!

The water filter cartridge is a hygiene product and cannot be returned after unsealing or installation! If you have any questions about installation, please contact our email support BEFOREhand!

The MMS Water Filter is very environmentally friendly from several points of view. It consumes no electricity, requires no chemicals, produces no waste water like reverse osmosis systems and requires no costly descaling. In addition, the more than double capacity, compared to conventional filters on the market, results in more than 50% less waste as well as less transport costs and exhaust fumes per year.

The activated carbon block is made exclusively from coconut shells, a renewable raw material.

Attention: The MMS Water filter requires regular periodic maintenance! To ensure consistent drinking water quality, the filter cartridge should be changed every 12 months or after 11,200 litres. The indicated performance and capacity depends on the respective water quality and the local water pressure and may vary. When the flow rate has decreased considerably, the end of the filter capacity has been reached and a change of the cartridge is necessary. The old cartridge can be disposed of in the household waste. Changes and errors excepted.

The annual filter changes can be carried out without a specialist.

ATTENTION: The triangles on top of the filter head indicate the water flow direction. The filter can be damaged if this is not observed!

2003
€209.24
€209.24 Stk / pcs
Our powerful drinking water filter for the household ✓ HIGHEST WATER QUALITY - thanks to the innovative 3-stage filter system - for the best possible price-performance ratio!✓ EASY TO USE - the pre-assembled, ready-to-connect complete system is quickly and safely installed even without specialist knowledge!✓ LABORATORY TESTED & SAFE - independently...

1022
€314.93
€314.93 Stk / pcs
2-year bundle MMS water filter from Aquarius pro life ✓ Special offer: -6% discount (on the sum of the list prices).✓ only for a short time (while stocks last!)✓ our TOP water filter in a 2-year bundle at a top price✓ enjoy our pure and refreshing drinking water for 2 years✓ ideal for stockpiling and crisis prevention✓ Our email support is there for you...

1023
€409.05
€409.05 Stk / pcs
3-year bundle MMS water filter from Aquarius pro life ✓ Special offer: -11% discount (on the sum of the list prices).✓ only for a short time (while stocks last!)✓ our TOP water filter in a 3-year bundle at a top price✓ enjoy our pure and refreshing drinking water for 3 years✓ ideal for stockpiling and crisis prevention✓ Our email support is there for you...